This FoxNews Poll shows the results for several political figures, when respondents were asked whether the subject was a “Strong and Decisive Leader”, and “Understands the Needs of Average Americans”.

I found it interesting that the subjects are ranked in descending “Decisive Leader” order, and that that closely matches the numbers for “Understands Needs” order. They descend roughly together, until “Understand” takes a jump back up with Clinton, and stays high for Kerry and the Algore.

So I did a little math. I wanted a single composite of both “scores”, so I plotted the results by hand, X=Understanding, Y=Leadership. If you look at the resulting graph, you see the subjects range from unpopular in the lower left (Gore Country) to Popular in the upper right(Giuliani Country). Also, they fall either above or below a diagonal line which indicates whether they lean more toward Leadership or more toward Understanding.

I also wanted more interpretation of the scant data, so I wrote a small python function lead(a,b) which takes a=leadership and b=understanding scores straight from the poll, and gives you back two numbers. The first number is sqrt(a^2+b^2), which on the graph is just the distance from zero that the subject earned. This is a numerical score for Popularity, and in the list below, it is the first number under a subject’s name. The function lead(a,b) also divides a/b (leadership/understanding) to give a quotient of leadership vs. understanding, and this is the second number under the subject’s name.

Using Rudy as our example, we would say that his popularity is 90.52 (minimum possible 0, maximum possible ~=~ 140), and a Leadership vs. Understanding quotient of 1.03 (over 1 = more leadership, under 1 = more understanding). The exact scores are reproduced at the bottom of this post.

If you now plot THESE scores you get some real information! Plot popularity from 60-100 going up the page. Plot Lead/Understand from 0.5 to 1.5 going left to right across the page. 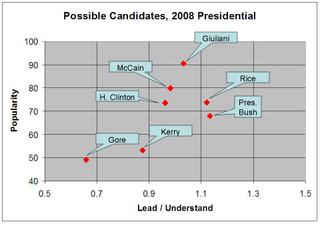 Obviously, President Bush is not a candidate, but was included in the poll.

Assuming that these numbers mean anything at all, Condoleezza Rice is a more popular version of GW Bush. John Mccain is a more popular version of Hillary. Rudy Giuliani is the most popular, and centered between the four previously mentioned subjects as far as Lead/Understand. Lying at the fringe of the main group is John Kerry, more popular only than Gore. And the Algore itself lies an amazing distance to the left (very low lead/understand score), far from the group, and less popular than any other as well.

Listed below are the results of my number-crunching, as copied and pasted directly from the program I used. They are listed in the same order as in the FoxNews poll; descending by “Decisive Leadership” percent answering “yes”.

This entry was posted in Uncategorized. Bookmark the permalink.