The Young Guns Network sent this flyer to Indiana democrats, beseeching them to vote for Lugar against Tea Party favorite Mourdock. 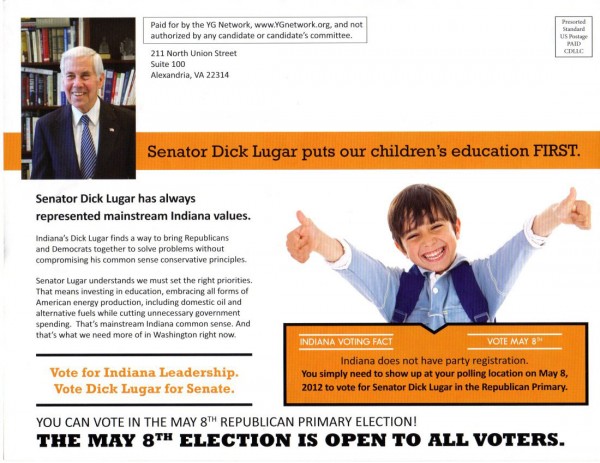 “Indiana does not have party registration,” the mail piece says over a picture of a smiling child giving a thumbs-up sign. “You simply need to show up at your polling location on May 8, 2012 to vote for Senator Dick Lugar in the Republican Primary.”

In case anyone didn’t get the point, the piece adds, “You can vote in the May 8th Republican Primary election! The May 8th Election is open to all voters.”

At other points ,the piece says Lugar, who is seen as facing an uphill battle against the conservative-backed insurgent, “has always represented mainstream Indiana values.”

Sarah Palin is campaigning for Mourdock, and McCain is campaigning for Lugar.  Barack Obama has called Lugar his best friend among Republicans.  So who is the Young Guns network?  Why it’s the GOP, of course.  This is a group run by two former Eric Cantor staffers which purports to, well, read for yourself:

By seeking solutions that create jobs, encourage innovation, instill fiscal discipline, establish a patient-centered health care system and pursue energy security, we can foster the optimal environment for America’s businesses and entrepreneurs to succeed and flourish.

Who the Hell cares about it when you phrase it like that? These folks call themselves “center-right”, which is a dog-whistle for democrats to befriend anti-Tea Party Republicans.  Language carries messages beyond the obvious.  The subtext in the way this is phrased is “It’s okay, democrats; we’re not mean and like those conservatives.  You can support us–we’re working to undo the damage done by our deranged and inbred cousins from wherever conservatives come from.  We’re all DC/NY/Boston wonks here, and will work to keep the Republican Party from getting too big or confident.  After all, we’re all in this together, and if the Tea Party has its way, our party is over.”

Think I’m laying it on too thick?  Even when I parse it, it’s a mixed-up mumbling pile of crap.  They’re going to (action) seek solutions to (goal) create jobs, in order to (action) foster (goal) flourishing business?  How exactly do they propose to “create jobs” or “encourage innovation” through the seeking of solutions, but somehow separate from the success and flourishing of businesses and entrepreneurs?  Sounds to me like they want to spend.

These are Tax and Spend Republicans, who want to maintain their grip on the money, regardless of any other results.  Notice that they say “instill fiscal discipline”.  Now I believe that they tested these statements well, and did not misspeak.  What this well-worn phrase means is “pay for tax cuts”, which means that they have bought into the Democrat nonsense about the way the economy works and the government’s place in it.  If they had meant “cut spending”, they would have said “cut spending”, right?

What’s a patient-centered health care system supposed to stand in opposition to?  A doctor-centered one?  A business-centered one?  A government-centered one?  A health-centered one?  Why not give their audience (center-right, remember) credit for understanding the market, or educating their audience on its value?  Why hide behind left-speak, unless they are actually targeting the left?  These are not conservatives, or even “center-right” people except  in the view of lefty pollsters.  This is another organization aimed at somehow winning the mythical group that votes upon no principle, holds no view on the proper role of government,  and feels no allegiance to one party or another.

There may be value in that, but for these folks to insert themselves and a hundred thousand dollars into a Republican primary by calling for democrats to sabotage a conservative is unacceptable.  For the GOP leadership’s own proxy minions to do it is infuriating.  Not that this is anything new.

I am thinking of designing a medal or ribbon to be awarded for meretricious service in the GWOT, the GOP’s War on the Tea Party.

This entry was posted in Conservative, GWOTP, Tea Party. Bookmark the permalink.