NPR, which loves Barack Obama only slightly, only slightly less than itself, offers a droll comparison of his price for love with that of Jesus:

AUDIENCE MEMBER: I love you, Barack!

Is contrasted with very little comment (I suppose the parallel should be obvious to those who know Him) to this passage:

When they had finished eating, Jesus said to Simon Peter,”Simon son of John, do you love me more than these?”

Which is from a book not written by Barack H. Obama, Dreams From Somebody Else’s Father.

Perhaps NPR is simply noting a similarity there.  Except that really, there isn’t a similarity, unless you accept the absurd notion that Obama’s Messianic salvation of we tax-paying lambs is to be accomplished through the self-sacrificing altruistic actions of unions and government employees voting themselves more benefits.  Heaven knows that Obama’s half-the-last-effort $477B stimulus bill is a crock of fish, and won’t create any jobs, but it WILL terrify employers from hiring.  After all, If the unemployed need salvation and Obama is the Way and the Light, then his two years of uncontested government should have yielded better than the current twin wicked cities of the plain: Parttime and Unemployah.

Perhaps they were just trying to get ahead of the inevitable wave of derisive scorn rightfully earned by such a self-lampooning comment.  But there’s another possibility.  It may be that NPR is simply so accustomed to whoring itself out,  in the semi-public-funded money-for-lovin’ service of the left that they just didn’t see anything odd about the remark.  It could be that their dry comparison of the One with The One was intended as a straight news story.  After all, this is their shingle: 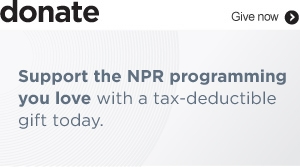 This entry was posted in American Politics, Media, Tea Party. Bookmark the permalink.